How to sterilize soil, and other learnings - Planting an indoor herb garden part 6

One full week has officially passed since I sowed the seeds in my tiny indoor herb garden. And, while it’s only been a week, there’s a lot about gardening and growing herbs indoors I’ve learned. So, today I wanted to reflect on some of those things, and share an update on the overall growth and health of the plants.

How to sterilize soil for indoor plants

One thing that's been a constant concern for me is the presents of pests and gnats in my soil. Knowing fungus gnat larvae and eggs can exist in different kinds of mixes, it was important for me to figure out how to sterilize my garden soil. Especially since I'll be doing this all indoors.

Sterilzing soil is simply the process of getting the soil hot enough to kill any gnat eggs, any fungi, or any unwanted pests that may hurt your plants or intrude your home. There are many methods to do this, but the method I use involves boiling some water and dumping it in your mix before sowing seeds:

This is just one method of sterilizing your potting mix, by the way. If you’re growing your garden outdoors in the earth, you can use a plastic sheet to suffocate and cook, and thereby sterilize your soil right in the ground. Or, you can bake your soil at a low temperature.

Whichever method you choose, I personally recommend to sterilizing soil before planting, and the boiling water method is great for this. Because, not only does it kill off any gnat eggs, it pre-waters your soil. This gives your seeds the ability to immediately begin soaking in water and starting the germination process, and gives you the control to sow your seeds in ideal temperatures and growing conditions.

Basil is the perfect beginner plant

My basil has grown so much since sowing, and has grown much faster than the other plants. 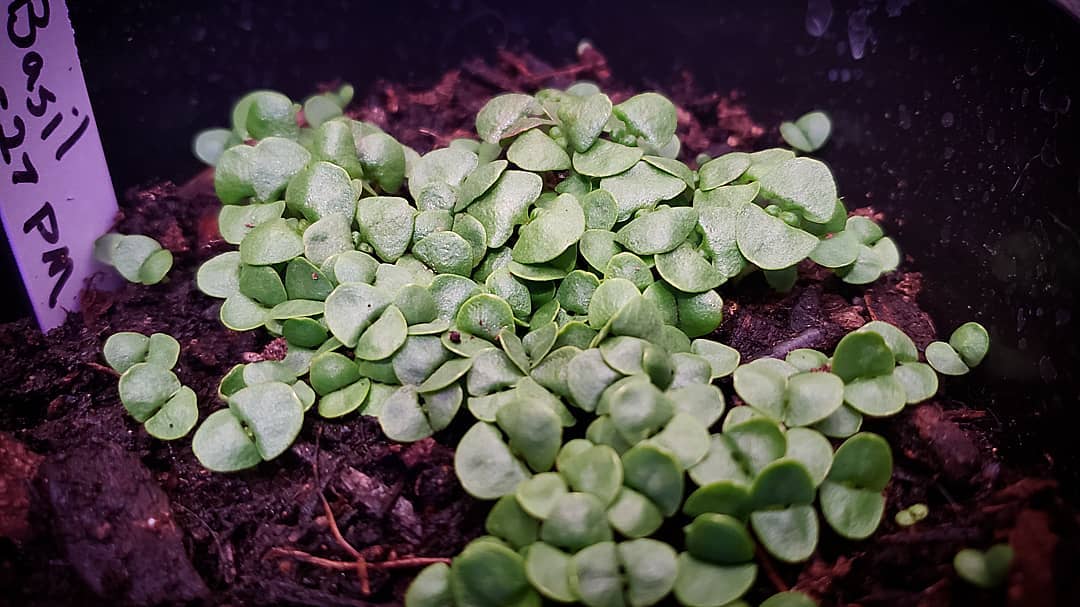 Many of you experienced gardeners know this already, but basil grows quickly compared to other herbs, making it extremely rewarding much sooner than other plants. In my case, I saw sprouts within 2-3 days of sowing the seeds, and daily growth after that.

Basil is also strong and doesn’t require demanding environmental conditions to grow, outside what you’d expect - some soil, water, and sunlight, and you’ll have yourself a healthy basil sprout in a matter of days.

Basil also gives you an opportunity to very easily sow seeds for your next season of growth. Once the flowers of a basil plant grow and die out, you can extract the seeds from them and re-sow them.

Thyme seeds are tiny, so be careful

Something I failed to mention early on: I accidentally pulled a Reese’s and got thyme in my basil.

I think some seeds got stuck to my hand/fingers, or some how may have gotten flicked into some of the other plants; either way, I have an occasional thyme sprout amongst my herbs.

Mint seeds are also tiny, but I lucked out and didn’t seem to scatter those all over the place.

The thyme is growing very well. As you can see, much like the basil, the starting leaves have opened up and the true leaves have begun to sprout up. 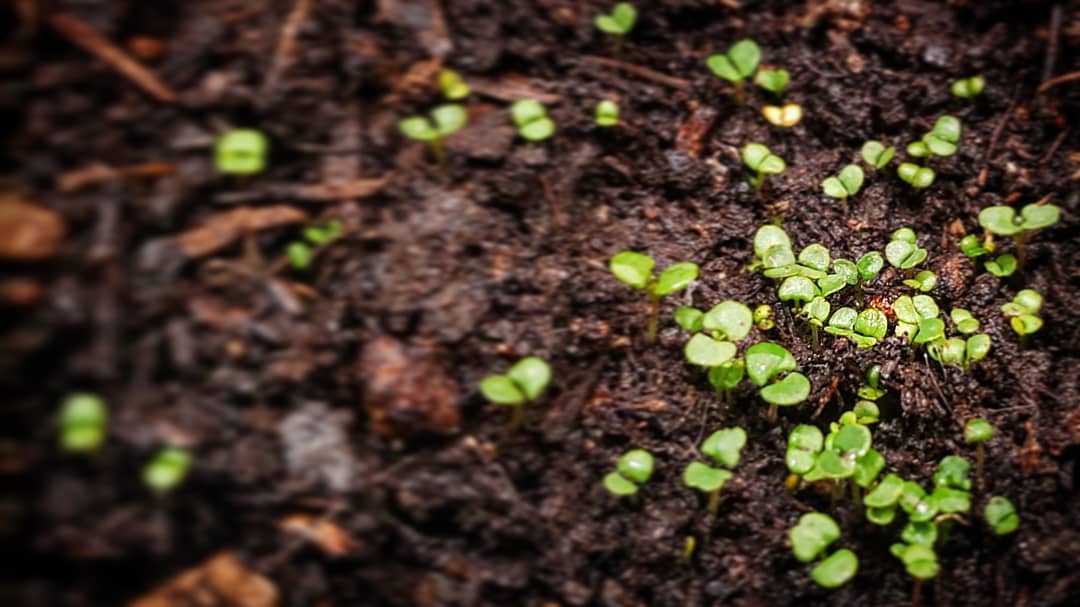 My Rosemary and mint have taken the longest to sprout. The mint has begun sprouting like wildfire, however, my rosemary is trailing behind all the other plants, with only a couple sprouts.

That’s to be expected - rosemary can take a couple weeks to germinate, so I’m just happy that I’ve got a rosemary sprout at all within the first week.

Same goes for the mint, which is known to take a good 10 days or so to sprout. But as you can see here, a ton of mint has already sprouted: 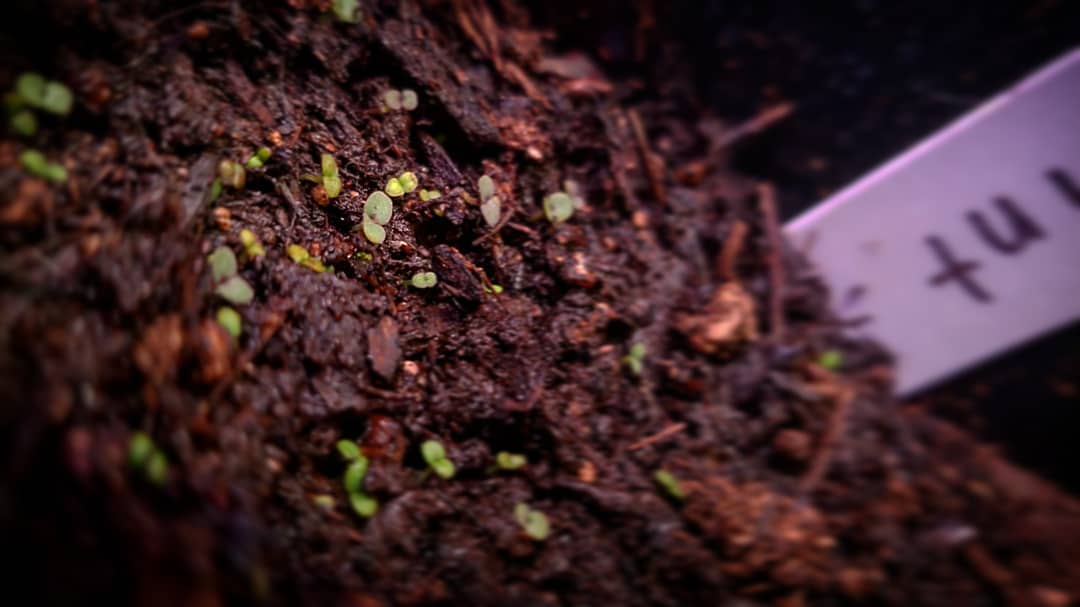 Avoid bugs and sterilize your soil

I mentioned this before in a previous post, but I had no clue you had to sterilize your soil. When asking other folks about this, they had no idea either. And for some reason, they don’t put ANY information about this on the soil you buy at the store.

That frustrates me a bit as someone who’s just starting out, who has had multiple frustrating experiences due to overwhelming pests and gnats, which would have been solved simply by sterilization.

So, In a few quick steps, I’m going to tell you how to sterilize your soil or potting mix -- or at least how I did it -- should you decide to grow some plants indoors.

I may sell seeds

As mentioned earlier, these herbs flower and spout seeds which can be resown. They can also be sold -- my intention is to provide my plants with a healthy life so they produce good, healthy leaves, and healthy seeds. I’ll resow some myself, but I’ll likely have an excess of hundreds and hundreds of seeds.

If you’re interested, leave a comment and I’ll be sure to reach out to you when the seeds are available!

I won’t be blogging daily about my garden but will definitely post as significant changes or growth occur.

I do plan on whipping out the DSLR and taking some nice photos close up - I’ve just been using my phone thus far.

In any case, you can check back in here, or follow me on instagram - @davidgenecrandall - where I post lots of photos of my plants, my cats, etc.

Oh, about that mystery plant!

I think it might have been a type of weed; it's possible it was a harmless seedling that got mixed up in one of my packets, but it's a foreign body that I don't want to allow to put my herbs at risk. So it's gone now. :)